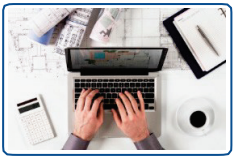 The use of digital signatures is becoming more commonplace both in the workplace and for personal use. Digital signing allows organizations to streamline signature and approval processes, eliminate paper and establish an audit trail.

This document was prepared by IdenTrust to help engineering firms and agencies understand how to prepare and accept documents, such as plans and CADD drawings, which include digital signatures.

Information provided in this document includes:

The ESIGN Act Authorizes the Use of Digital Signatures

The Electronic Signatures in Global and National Commerce Act (ESIGN, Pub.L. 106–229, 114 Stat. 464, enacted June 30, 2000, 15 U.S.C. ch. 96) is a United States federal law passed by the U.S. Congress to facilitate the use of electronic records and electronic signatures in interstate and foreign commerce by ensuring the validity and legal effect of contracts entered into electronically.

Although every state has at least one law pertaining to electronic signatures, it is the federal law that lays out the guidelines for interstate commerce. The general intent of the ESIGN Act is spelled out in the very first section (101.a), that a contract or signature “may not be denied legal effect, validity, or enforceability solely because it is in electronic form”. This simple statement provides that electronic signatures and records are just as good as their paper equivalents, and therefore subject to the same legal scrutiny of authenticity that applies to paper documents.

It must be noted that there are important distinctions between a digital signature and an electronic signature. This is shown in the chart below. 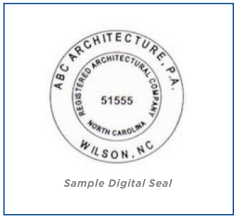 Visit IdenTrust.com for more
information about IGC
digital certificates or
contact the IdenTrust IGC
sales team at 801-384-3514
or
[email protected]

Digital signing requires that the signer use a credential (such as a digital certificate) that is bound to his or her identity. Binding the identity of a signer to the credential that is used for signing creates assurance that the individual who is signing a document really is who they say they are. When an identity-based credential is used, the signature is considered non-repudiable and is legally binding.

IdenTrust issues certificates under the IdenTrust Global Common (IGC) program, a policy owned and managed by IdenTrust and cross-certified with the Federal Bridge PKI program to use for digitally signing and sealing plans and other documentation. IGC certificates are considered identity-based, because the identity of the individual who applies for the certificate is “vetted” by validating that the information provided during the application process is accurate. Only then can a digital certificate be issued.

Many federal, state and local agencies now accept digital professional seals (such as engineer, architect, surveyor and notary seals) in conjunction with a digital signature. In fact, some State Department of Transportation (DoT) agencies and cities now require the use of digital signing and sealing on plan submissions. Digital seals can be purchased from various vendors who provide traditional rubber stamps and embossing seals. A digital seal is easily incorporated into a digital signature that is produced when signing with an identity-based digital certificate.

How Digital Signatures are Created Using a Digital Certificate

The following graphics illustrate how digital signing is accomplished in Adobe®

How Digital Signatures are Validated

Adobe® also has the ability to validate digital signatures, including validation of the certificate used to create the signature, as depicted here. Each time a signed Adobe® PDF is opened, the application automatically validates the signature. If more than one digital signature has been applied to the document, then all signatures are validated when opened.
Image 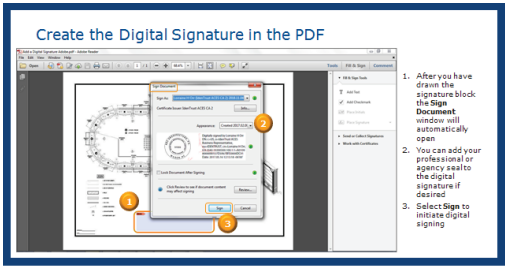 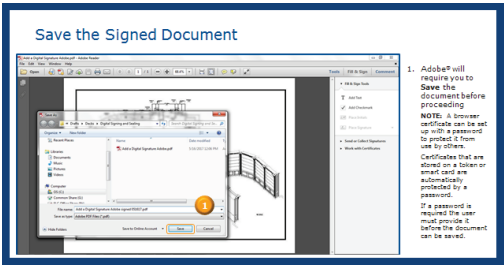 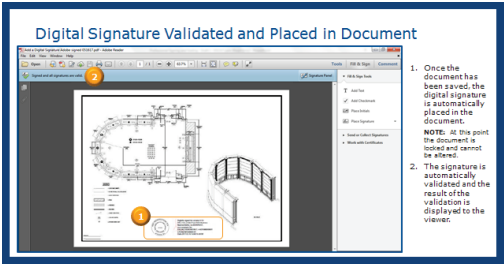